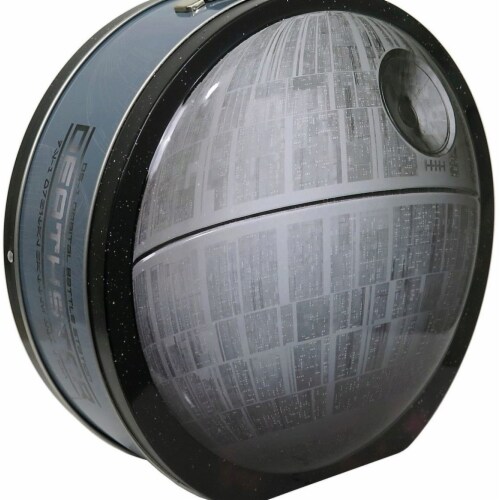 Finally, a Death Star that's actually smaller than a moon. Yes, our Star Wars Death Star Tin Lunch Box sports the shape and likeness of the Empire's planet-killing super-weapon. With a raised and accurately indented rendering on one side, and a more flat variation on the other, this circular, collectible Death Star lunch box features crisp, stunning images allowing one to discern each separate segment of the monolithic doombringer. The space between Death Star-adorned facades is filled with blueprint schematics and the official Imperial designation. So, smaller than a moon, but obviously large enough for a moon pie. Made from solid tin! Measures 7.5" high, 7.75" across, 3" deep. Metal clasp for secure closure. Plastic extending handle.